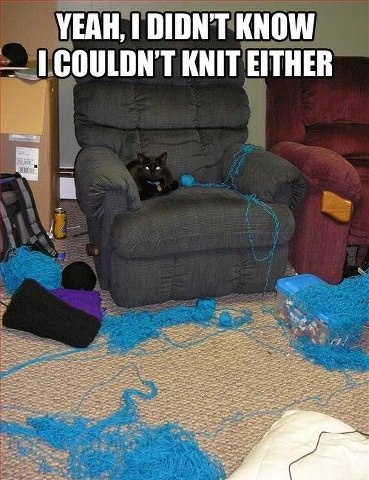 Twice in my life I have Freecycled impossibly tangled yarn. Once, the culprit was my toddler who unwound  two skeins of yarn and not only that, carried one end in each hand and walked through the house with them. This happened in the span of maybe 2 minutes while I ran to them bathroom. Those toddlers are lightning quick little buggers. The other time was kitten related. Kittens are going to kitten. After that I made sure there was never yarn in open baskets or left unattended on the couch.

I remember wondering  when the yarn was rapidly snatched up on Freecycle , “WHO in the world would want to deal with that mess?!” And not begrudgingly. Gleefully!

It’s these people: The Detanglers

Daphne Basnet, from Melbourne, once spent $50 on eBay for a 25-pound box of hopelessly twisted string, just for something fun to do. That was before she even knew of the existence of the Knot a Problem. It took her five long weeks to ‘detangle’ the 120 balls of yarn-worth of knotted mess, a time that she looks back on fondly. “I was so happy, I can’t tell you,” she recalled.

Later, Basnet found out about a whole community of knot-lovers like herself formed within an online group of knitters and crocheters called Ravelry. Frustrated knitters post messages calling for help with their messed up and often expensive yarn, and Knot a Problem always comes to the rescue. They willingly offer to untangle the mess for free, just so long as shipping costs are covered. Sometimes the competition for tangled yarn projects gets so crazy that detanglers check for posts multiple times a day. “People will jump in and say, ‘Send it to me!’” said Mary Enright, a 56-year-old detangler and Knot a Problem member.

It also sounds like it’s incredibly cathartic. Maybe I should try it.